What Would Happen if a Magnitude 9 Earthquake Hit British Columbia? 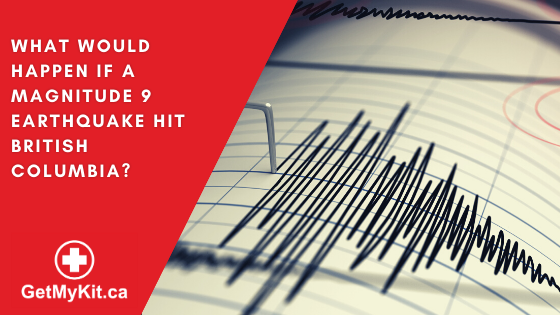 The big shakedown. Chances are, if you grew up in BC, you know what we are referring to. Vancouver sits on the fault line of two major tectonic plates, the North American Plate and the Juan de Fuca Plate. Currently, the Juan De Fuca plate is attempting to slide underneath the North American Plate, as it has been for a long time, but when it finally completes its geological quest- it will cause an earthquake larger than any BC resident has seen in centuries.

SOME HISTORY ON THE LAST BIG ONE IN BC

The last time this happened was way back in the 1700s, when the architecture, landscape, and climate of our province looked incredibly different than what we see today. We know this because of First Nation storytelling and due to samples taken off the ocean floor. The oral story passed down by the ​Haida peoples is a tale of loss and devastation, even before modern architecture and concentrated populations. The damage that could be done today is hard to comprehend.

Firstly, the structural damage alone would be devastating in an area with high demand for housing, to begin with. The provincial emergency response plan estimates 150 buildings to collapse and another 4000 to be so badly damaged they would need to be demolished, just in the city of Vancouver alone. These falling buildings will take out natural gas lines, electric lines, cell phone towers and bring traffic to a standstill as people start to panic and search for their loved ones with desperation.

Older builds in Victoria are much more vulnerable to structural failure because they lack proper earthquake-resistant foundations and the island is closer to the fault line than the mainland.

THE RISK OF A TSUNAMI

We’ve seen it in Japan, we’ve seen it in Indonesia, after every big earthquake there is always a tsunami to be the deadly icing on the destructive cake. Tsunamis are created when a plate shifts underneath the water and can often look like an average wave. But do not be fooled, these death traps move as quick as a jet plane and wreak havoc on already devastated cities. If you are on the coast and an earthquake happens, get to high ground as fast as possible to reduce your chances of being caught in this deadly wave. Those on Vancouver island should be especially vigilant as the wave will hit them first and the hardest.

Vancouver’s port is one of the largest on the West Coast. The earthquake, followed by the tsunami and then the ensuing chaos will halt all planes, ships or trains scheduled to deliver goods to many countries across the world, hurting Canada’s and more specifically BC’s economy.

Seismologists say there is a one in three chance of this earthquake hitting in the next 50-100 years and there has been mounting pressure for the Vancouver government to do more. ​The Insurance Bureau of Canada projects we will need $75 billion dollars to repair the damages. Insurance covers $20 billion of that but $55 billion dollars is still near to what BC makes in one year, this is a staggering burden for the government (​Stelmakowich,2013​).

HOW YOU CAN PREPARE

We cannot control when the earthquake comes, however, we can control how prepared we are for it. Open a dialogue with your family about what you should do during a disaster and choose a meeting spot after the quake stops. Make sure all your work data is backed up on servers outside of the office, to minimize financial losses and most importantly have an emergency kit packed and ready to grab at the drop of a hat. This bag should have enough supplies to sustain your household for 72 hours. Emergency management BC recommends this kit includes 4L of water per person per day, non-perishable food items, a light source, a battery-powered radio, masks, money and hygiene products.

GetMyKit’s Basic Emergency Survival Kit checks all of those boxes and gives you extra helpful items like an army knife and a flashlight with an attached siren all in a conveniently sized backpack. We offer packs for two-person households up to eight-person households, a one time purchase to ensure your family’s safety for years to come. Alison Bird cautions us to ensure we do not just “see disasters as things that happen to others” because then when the inevitable disaster hits and we cannot just avoid the thought anymore, we do not know how to react. So get as prepared as you can now, it may be uncomfortable to allow the idea to come to life, but you’ll be thankful you did in the long run.